skip to main | skip to sidebar

A Tribute to My Friend, Amy

Today's post is in honor of my sweet friend, Amy, who was diagnosed a couple of weeks ago with Acute Myelogenous Leukemia. Amy, we love you and are so happy that your first round of chemo worked its magic! You are beautifully strong, extremely intelligent, amazing person---so full of love and of life!

There once was a woman who woke up one morning, looked in the mirror and noticed she had 3 hairs on her head."Well,"she said, "I think I'll braid my hair today!"So she did ...and she had a wonderful day.

The next day she woke up, looked in the mirror and saw that she had on 2 hairs on her head."Hmm," she said."I think I'll part my hair down the middle today."So she did...and she had a grand day.

The next day she woke up and noticed that that she had only 1 hair on her head."Well," she said, "today I'm going to wear my hair in a pony tail." So she did ...and she had a fun, fun day.

The next day she woke up and noticed that there was not one single hair on her head."YEA!," she exclaimed."I dont have to fix my hair today!" They say that attitude is everything.Life is not about waiting for the storm to pass...it is about learning how to dance in the rain.

Mike is going to hate me for sharing this, but it is just too funny not to write down. Last night, Mike was reading to Ava before bed. I was next door in Maya's room getting ready to read with her as well. All of the sudden, I hear Ava ask Mike, "Daddy, do you have a baby in your tummy?" To which he replies, "No, Ava, Daddies don't have babies, only mommies have babies." So, Ava continues, "Then WHAT is IN there?!?!"
Posted by Amy at 5:47 PM 5 comments:

Sometimes the cutest things come out of a 3 year old's mouth. The other day, I picked up her friend, Sam, on the way to preschool. They were chatting in the back, as 3 year olds do, about...ghosts. Ava was explaining to Sam that ghosts don't brush their teeth because they don't have hands to brush their teeth with...and they probably don't have teeth, either. So these are the thoughts going through her head when she looks at me pensively while sucking her two fingers.....

It was 46 degrees today. Heat wave! Things were melting, and it was raining. When I picked up Ava from preschool and was putting her in the car seat, she was looking at the windshield and asked, "Mommy, why are there polka dots on the window??" How poetic! Gotta love that kind of imagery....

Then there was the time last month, when I was putting together a photo montage for our 10th wedding anniversary, when she saw a picture of Mike and I on our wedding day. She immediately GASPED as if she was discovering a pot of gold, "MOMMY! LOOK! You are a princess, and Daddy is your prince!!"
Posted by Amy at 10:27 PM 2 comments: 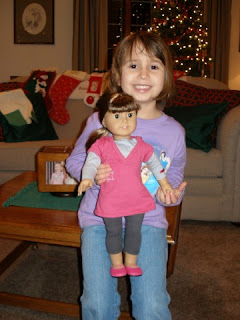 Maya got a "Just Like You" American Girl doll from my parents for her 7th birthday. She has been wanting one for awhile now, and with the recent opening of the American Girl store at the Mall of America, it seemed like the right time. She absolutely loves this doll. The first morning after she got it, she "made" her doll breakfast (pancakes with butter, out of construction paper...see picture.) They have had numerous tea parties together, and she treats her like a true, real friend.
Last weekend, Maya had been exceptionally good, so we thought we might venture out to the Mall of America and check out the store. We told her that she could pick something out in the store that was $10 or less. She could find nothing. She thought her doll could really use a pair of boots to get her through the Minnesota winter....but the cheapest ones she could find were $14 (the same price I paid for Ava's REAL winter boots at Target!) She thought she could get her doll's hair done....but all she could get for $10 was a ribbon in her hair...that wouldn't do. She was 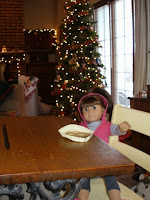 frustrated. I didn't blame her. But we had a chat, and she decided that she would save her money up for a couple of months and come back and get her doll's hair done in the style that she wanted.
So, we came home and devised a chart to keep track of how she would earn her money each day. She has five requirements each day, and each one is worth 10 cents, so she can earn a total of 50 cents a day. This is similar to other charts that we have done in the past to help her earn allowance, with a little variation to keep things interesting. She has calculated that if she fulfills her requirements each day, she will be able to take her doll to the store by the end of February. She has made it almost an entire week now, and she has earned 40-50 cents each day. She is quite focused! She is learning, once again, though, how much harder it is to earn money than to spend it. When we added up her chart tonight, she let out a sigh and explained matter-of-factly, "Mommy, you don't have to teach me the value of a dollar anymore! I already know....it's almost NOTHING!"
Posted by Amy at 10:14 PM 3 comments: 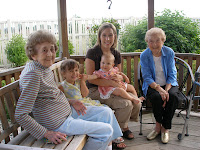 This month, our book club is reading What Happy People Know by Dan Baker. So, I've been thinking a lot about happiness lately. Not just my own, but of society in general.

My Great Aunt Sadie died recently. She was 96. A lot of changes have occurred between her generation and mine. I think of all of the things that have been added to most (if not all) American homes since she was a child on the farm (one of twelve children, I might add): indoor plumbing, a washing machine, a television, a phone, an automobile, a microwave, a computer. These are all things we have long since taken for granted. Life is much more convenient now, but are we happier and more fulfilled because of it? I don't think so...and neither does Professor Kelly Lambert, PhD, who conducted research that suggests that the hands-on effort and completion of physical tasks that were once required to provide life's necessities (referred to as "effort-based rewards") are actually key components of happiness. In a recent study, Lambert tracked two groups of rats: The first had to dig through piles of cage bedding to find their food, simulating the gathering of a harvest. The "trust fund" rats of the second group were simply given their food--no work necessary. The working rats came out of the experiment healthier, showing higher levels of persistence and boldness than their coddled counterparts--characteristics that are vital to overcoming difficulties in life. The trust fund rats, meanwhile, became fat and depressed. Completing any kind of manual task--whether it's cooking a meal or shoveling a sidewalk--triggers the efforts-driven-rewards circuit in human minds, too. Working together, this network of key motor, emotional and rewards centers plays an important role in creating a sense of happiness and well-being over time.
I won't dismiss the many benefits of technology, but it is good to remember that it does not change the ways our bodies and souls are wired.
(Pictured above, during the summer of 2006, are Aunt Sadie, Maya, me, Ava, and Grandma Baker--who, by the way, refused to ever use a microwave because she thought it greatly diminished the quality of the food...and just didn't want to change the way she cooked, God Bless her!)

Another activity my friend Jodi encouraged her blog readers to do is document their day in pictures. We were running early this morning so, on the way to the bus stop, I thought it would be fun to grab the camera and give it a shot (pun intended.) I told Maya what I was going to do, and she thought it was a great idea (had she thought otherwise, she would not have cooperated, and this would not have turned out so well.) She asked me, "Is this your own creative idea, Mommy, or did someone tell you to do it?" How did she know to ask that?

"The greatest good you can do for another is not just share your riches, but to reveal to him his own."
~Benjamin Disraeli (1804-1881)

"Be not afraid of growing slowly, be afraid only of standing still. "
~ Chinese proverb

The finest inheritance you can give to a child is to allow it to make its own way, completely on its own feet.
~Isadora Duncan, U.S. dancer (1878-1927)

Be aware that a halo only has to fall a few inches to become a noose.
~Dan McKinnon, Canadian singer-songwriter

We can do no great things, only small things with great love.
~Mother Teresa

Just to be is a blessing. Just to live is holy.
~Abraham Joshua Heschel

It is the simple things of life that make living worthwhile, the sweet fundamental things such as love and duty, work and rest, and living close to nature.
~Laura Ingalls Wilder 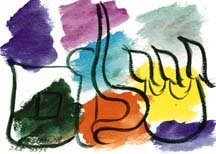 Links and Blogs of Interest

This is a Flickr badge showing public photos and videos from bellowefamily. Make your own badge here.

Amy
If you are reading this blog, you most likely already know me and have your own (hopefully positive)opinions regarding this category. Here's my condensed version: I am the lucky wife of a hard-working and devoted husband and father, Michael, and together we have two beautiful girls, Maya (6) and Ava(3). I have previously taught high school English in a variety of settings and am currently employed as a "stay-at-home-mom." I have decided to keep this blog for my own therapeutic purposes, to document the trials and tribulations of parenthood and life in general, and share with any interested family members and friends.